Tom Thumb and the Traits of Tininess

Tom Thumb is one of the more enduring children's stories, while in adult literature one of the more enduring images is of Gulliver pinned down by the strings of the tiny Lilliputians. Meanwhile, the number of science fiction stories featuring shrunken humans or tiny humanoids is legion. Therefore, let us see how this concept stacks up against biology.
From what you have just read, you might think that large size is a hindrance rather than a help. Nevertheless, let's not forget that the dinosaurs lasted 120 million years, and if it hadn't been for the asteroid, they would probably still be here today. The fact is, within a species, the larger individuals tend to be dominant, have preferential access to resources, and are better at dealing with predators and prey. Thus, the species itself will tend to grow bigger with time - a phenomenon known as Cope's rule. Each species will therefore end up the maximum size possible for its lifestyle and habitat. Just the same, most of the giants are now extinct. Huge animals are evolutionary dead ends. They are too specialised, they need too much space and too much food, and they breed too slowly to respond to changing conditions. Also, even during the age of giants, the vast majority of species were small.
Their first trait of the tiny is their enormous relative strength. A man with the strength of an ant could lift a house. A flea the size of a man could leap tall buildings in a single bound. This sort of thing is grist to the mill of popular science articles, and there is a tendency among the less informed sci fi writers to take it literally. Again, you may pause to wonder why no animals of such tremendous strength have ever been known. The reason, of course, is the same square-cube rule which allows them to walk on spindly legs: their skeletons and muscles have a much greater cross-section per unit weight.
Likewise, although gorillas only occasionally climb trees, a mouse can scurry up a vertical trunk because its claws can find a grip on the tiniest crevices in the bark, and both claws and bark are firm enough to hold its tiny weight. Shrunken even further, an animal has the option of furnishing its extremities with tiny suction caps or drops of glue. In the 1986 version of The Fly, we saw a scientist genetically amalgamated with a fly (another biological impossibility) walk upside down on the ceiling. Nowhere was there any indication of how he could have done so. It was apparently some occult power granted only to flies, and unrelated to anything biological.
Another major characteristic of small animals, and a major handicap at that, is that they have a much greater surface area to body mass. This means that they gain and lose heat very quickly. This will be explored fully in the next chapter. In the meantime -


Sound
The sounds made by the very small are high-pitched as well as soft. Sound is caused by movement of air, and its frequency, naturally enough, by the frequency at which the sound maker vibrates. An eagle simply cannot flap its wings 1,000 times a second, neither would it need to. On the other hand, a humming bird, with much smaller wings, and the need to hover on one spot, beats its wings into a humming blur. At the bottom of the scale, a mosquito's wings beat so fast they produce a high-pitched whine.
Insects, of course, do not possess voices as such. Their calls are made by rubbing, tapping, or vibrating their extremities. True voices are the possession of land vertebrates with lungs able to pass air over such organs as vocal chords, and allow it to resonate in their mouths and noses. The resultant sound vibrates at the natural frequency of the vocal structures, and thus the pitch is inversely proportional to their size. Thus, small animals produce high-pitched squeaks, squeals, and chirps, while larger species growl, roar, or bellow at a lower frequency.
There is an unexpected side effect to all of this. High-pitched sounds are the least dampened when they bounce off objects i.e. they produce the best echoes. They are therefore ideal for echolocation. When something is small as a shrew scurries around, the tiny squeaks it utters to keep in contact with other shrews may also act as a form of radar in the dark. It is not well known that some species of shrew can echolocate, just like bats.
This does not mean, of course, that larger species cannot echolocate; just look at dolphins. However, it does mean that it would have to fit into the general evolutionary scheme of things. An organ cannot evolve unless there is a continuing function for it all the way along the line. Therefore, if human beings could echolocate, you may take it for granted that apes and monkeys could do so too. It would have evolved when our ancestors were shrew sized, and would have required a gradual restructuring of the vocal apparatus as size increased - provided there was a continuing need for echolocation all through the evolutionary process.
At the other end of the scale, it has only recently been discovered that elephants communicate by infra-sound: deep rumbles too low in frequency for the human ear to hear, but which are nevertheless very loud. Sections of the herd can keep in touch while being separated by several miles, and a cow on heat will drive bulls mad for miles around. The implications are staggering, and are only now being worked out. One wonders what it was like with the dinosaurs. The corollary of all this is that a species' hearing ability is dependent on size, for hearing is simply registering the beating of waves of air pressure against the ear drum, whose size is dependent on the overall size of the animal. Thus, every species is more sensitive to the same frequencies of sound it makes.


Of Eyes and Brains
Another characteristic of small animals is that their internal set-up is simpler. The inhabitants of Lilliput, being one sixth the dimensions of normal people, would not only lose and gain heat much more quickly, but they would lack the highly complex system of small blood vessels we require, since every part of their bodies would be in close proximity to a source of blood. If humans were to be artificially shrunk, then they would not only lose cells, but their internal complexity would have to collapse.
However, not everything in the animal kingdom is relative. For some items, bigger really is better, and those items are eyes and brains. An eye is essentially a globular camera, focusing light on the light-sensitive cells at the rear. The optical acuity ie how much fine detail can be distinguished, is determined by the absolute number of these cells, and there is a limit as to how closely they can be packed. So, for example, although a whale's eye appears small in comparison to its body, in absolute terms it is a very big eye, capable of high resolution. A mouse's eye, on the other hand, is big in proportion to its body - indeed, it bulges - but is small in absolute terms. Not only that, but because the retina, or rear of the eye, is so close to the lens, there is the added difficulty of focusing the light on the retina. The lens must swell, thus occupying more relative space in the eyeball, and putting it even closer to the retina. It is a vicious circle, and there is nothing the poor creature can do about it except to put its trust in its nose and ears.
Most of you are probably aware that insects possess compound eyes radically different from our own. Indeed, it is common in the movies to show them receiving a hundred different versions of the same scene. This is a gross misconception. Essentially, each unit of the eye, or ommatidium, is a miniature eye, with its own lens and retina, allowing a single unit of light to be recorded by the brain. This is very much less efficient than a similarly sized vertebrate eye, and visual acuity is far too low to permit accurate recognition of form. How often have you said, "I'd like to be a fly on the wall when such-and-such happens"? You wouldn't see much.
A similar situation occurs with brains, but the pattern is more complex. In the simplest terms, we may distinguish between the functional part of the brain, which controls respiration, digestion, the senses, and movement, and the intelligence part, which overlays the former. An elephant's brain is three times as big as ours, because it needs a larger functional brain. But there is not a one-to-one ratio because, after all, a brain can tell a big muscle to contract just as easily as a small one. A man is smarter than a chimpanzee because the intelligence section of his brain is bigger. Nevertheless, among humans, IQ has very little to do with brain size, and a lot more to do with the complexity of the interconnections within the brain.
But the bottom line is, within broad limits, intelligence is dependent on brain size. It is just not possible to fit a human-like intelligence into the skull of a monkey. And Gulliver's Lilliputians would not only have very poor eyesight; they would not be able to think in any real fashion.
It is also germane to mention that large brains have one major disadvantage: getting into the world. In most species the newborn brain is about 90% of the adult size. With human babies it is 26%. Just the same, their large skulls are the reason women have such difficult births, and this is going to be a major problem in the evolution of the human brain.
Let us now visualise an alien half the dimensions of a human being. Its weight would be only an eighth of ours, but its brain, and probably its eyes, would be comparable in size to our own. In other words, it would possess eyes and a globular cranium out of all proportion to its diminutive stature, or even to its small jaws and nose. If you follow the UFO scene, you will know exactly what I mean. This is a perfect description of the "greys": the most common humanoid seen in relation to flying saucers. Like science fiction writers, very few ufologists knew much about biology, so hardly any have commented on the fact that the greys so closely satisfy predictions made on purely biological grounds. This fact might suggest that they are not mere figments of the imagination. (How they manage to reproduce is, however, an unsolved issue.)

Now, you may wish to go to the next chapter, Eating for Your Size, or the Secret of the Dinosaurs.
Or go back to the Index.
Posted by Malcolm Smith at 22:05

The Stranger from the Stars 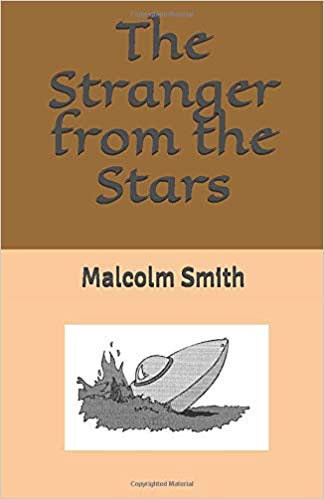 Available from Amazon. Click on image to see background.

Trials of a Tourist

The Truth About Bunyips

A Zoologist Looks at Science Fiction

Malcolm Smith
I am a zoology graduate, ex-public servant, globetrotter, author, and amateur polymath. Full details are given on my "Home" blog.